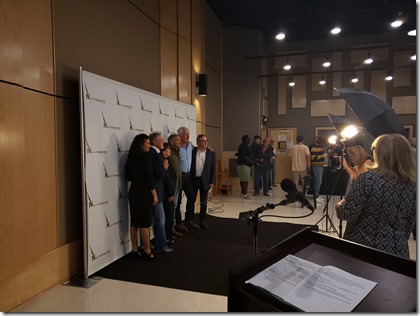 Yesterday I had the honor of attending the announcement of the Nashville Songwriters Hall of Fame’s 2018 inductees, Ronnie Dunn, K.T. Oslin, Byron Hill, Wayne Kirkpatrick and Joe Melson.  I am so honored to serve as general counsel for this outstanding organization and serve with president Pat Alger, executive director Mark Ford, and all of the other talented and wonderful directors on the board, not to mention the fact that I get to brush elbows with these 200+ amazingly talented songwriters.  Below is the press release:

[/fusion_text][fusion_text columns=”” column_min_width=”” column_spacing=”” rule_style=”default” rule_size=”” rule_color=”” class=”” id=””]Nashville, TN August 7, 2018 – Ronnie Dunn, K.T. Oslin, Byron Hill, Wayne Kirkpatrick and Joe Melson will be inducted into the Nashville Songwriters Hall of Fame in October, according to an announcement made today by Hall of Fame member Pat Alger, chair of the organization’s board of directors.

The five new inductees will join the 208 existing members of the elite organization when they are officially inducted during the 48th Anniversary Nashville Songwriters Hall of Fame Gala on Sunday, October 28, at the Music City Center.

Byron Hill’s songwriter credits include “Pickin’ Up Strangers” (Johnny Lee), “Fool Hearted Memory” (George Strait) and “Nothing On But The Radio” (Gary Allan).  Wayne Kirkpatrick’s resume is known for the Grammy-winning “Change The World” (Eric Clapton) and “Little White Church” (Little Big Town) and the Broadway musical Something Rotten!.  Joe Melson is the co-writer of the Roy Orbison hits “Only The Lonely (Know The Way I Feel),” “Crying” and “Blue Bayou.”  Ronnie Dunn popularized many of his own compositions, including the Brooks & Dunn hits “Neon Moon,” “Boot Scootin’ Boogie” and “Believe.”  K.T. Oslin recorded many of her self-penned hits, including “80s Ladies,” “Hold Me” and “Come Next Monday.”

The Nashville Songwriters Hall of Fame Gala is one of the music industry’s premier events of the year.  The evening features tributes and performances of the inductees’ songs by special guest artists.  In recent years artists such as Garth Brooks, Luke Bryan, Jimmy Buffett, Ronnie Dunn, Emmylou Harris, Alan Jackson, Tim McGraw, Thomas Rhett, Blake Shelton, Marty Stuart, Taylor Swift, Josh Turner and Trisha Yearwood have performed at or participated in the event.

Also at the event, NaSHOF will present Reba McEntire with the inaugural Career Maker Award in honor of her significant influence on the songwriting careers of Hall of Fame members.

Tickets for the Hall of Fame Gala are $250 each and benefit the nonprofit Nashville Songwriters Foundation.  Select seating is available to the public and may be purchased as available by contacting Executive Director Mark Ford athoftix@nashvillesongwritersfoundation.com or 615-460-6556.

About the Nashville Songwriters Hall of Fame:

BYRON HILL
Winston-Salem, N.C., native Byron Hill moved to Nashville in 1978 and soon signed with ATV Music Group, where he enjoyed his first cuts with “Pickin’ Up Strangers” by Johnny Lee and George Strait’s first #1 “Fool Hearted Memory” in 1982.  Byron left ATV in 1984, but his songwriting resume continued to expand with “Nights” by Ed Bruce, “Born Country” by Alabama, “Alright Already” by Larry Stewart, “Lifestyles Of The Not So Rich And Famous” by Tracy Byrd, “High-Tech Redneck” by George Jones, “If I Was A Drinkin’ Man” by Neal McCoy, “Nothing On But The Radio” by Gary Allan and “Size Matters (Someday)” by Joe Nichols.  Other artists who have recorded Byron’s songs include Jason Aldean, Randy Travis, Keith Whitley, Rhonda Vincent, Don Williams, Trace Adkins, Toby Keith, Porter Wagoner, Brooks & Dunn, The Oak Ridge Boys, Ricky Skaggs and Reba McEntire.  To date, Byron’s songs have generated more than 700 recordings, earned 91 RIAA certified Gold and Platinum awards, 10 ASCAP awards, 34 U.S. and Canadian Top-10 chart hits and numerous hits in other global markets.

WAYNE KIRKPATRICK
At age 14, Wayne Kirkpatrick moved with his family to Baton Rouge, La.  After a guitar lesson at a Florida Bible camp, Wayne began spending hours after school writing songs and playing younger brother Karey’s acoustic guitar.  Both brothers eventually moved to Nashville, where Karey helped Wayne secure some of his first cuts.  Since then, Wayne has had nearly two dozen chart-topping Contemporary Christian and Pop singles, including “Every Heartbeat,” “Good For Me” and “Takes A Little Time” by Amy Grant and “Place In This World” by Michael W. Smith (the 1992 Dove Song of the Year).  In 1996, Wayne’s co-written “Change The World” by Eric Clapton was featured in the film Phenomenon and earned the 1996 Grammy for Song of the Year.  In 1999 Wayne sang, played and co-wrote eight songs on Garth Brooks’ In The Life Of Chris Gaines project, including “Lost In You” and “It Don’t Matter To The Sun.”  In 2002 he began a longtime collaboration with Little Big Town that yielded hits such as “Boondocks,” “Bring It On Home” and “Little White Church.”  In 2010, Wayne and Karey began working on the musical Something Rotten!, which opened on Broadway in 2015 and earned 10 Tony Award nominations, including Best Musical and Best Original Score.  The show launched a U.S. tour in 2017.

JOE MELSON
Joe Melson grew up in Bonham, Texas.  He began writing and singing his own songs at an early age.  He spent much of his young adult years working at Standard Oil by day then playing high-school dances and local night clubs with his Rockabilly band by night.  In 1957, Joe met and began writing with a then-unknown Roy Orbison.  In 1960, their song “Only The Lonely (Know The Way I Feel)” launched Orbison into superstardom.  The first operatic rock ballad in history, that single was inducted into the Grammy Hall of Fame in 1999.  In 1961, the team created the smash “Crying.”  It became a giant hit for Orbison, was revived as a pop hit by Jay & The Americans five years later and entered the country repertoire via versions by Ronnie Milsap and Don McLean, among many others. Orbison’s single was inducted into the Grammy Hall of Fame in 2002.  In 1963, the duo’s “Blue Bayou” became another hit for Orbison (and, years later, Linda Ronstadt).  Joe’s song catalgoue also includes “Blue Angel,” “Running Scared,” “Lana” and “I’m Hurtin’” (all hits for Orbison), as well as “Run Baby Run (Back Into My Arms)” by The Newbeats and the Glenn Barber singles “Unexpected Goodbye” and “I’m The Man On Susie’s Mind.”  In 2002 Joe was inducted into the Rockabilly Hall of Fame.

RONNIE DUNN
Ronnie Dunn was born in Texas, but Tulsa, Okla., became his hometown.  He began playing guitar and performing in Country bands when he was in his teens.  After winning the Marlboro Talent Search, Arista Records expressed interest in him.  The label teamed him with singer-songwriter Kix Brooks, and the two recorded as Brooks & Dunn from 1991-2011.  The mega-duo sold millions of records and was named CMA Vocal Duo 14 times.  The Brooks & Dunn hits “Neon Moon,” “Hard Workin’ Man,” “She Used To Be Mine,” “She’s Not The Cheatin’ Kind” and “Little Miss Honky Tonk” were all written solo by Ronnie, as was “Boot Scootin’ Boogie,” which was named ACM Song of the Year in 1992.  Ronnie was BMI’s Country Songwriter of the Year in 1996 and 1998.  Co-written Brooks & Dunn hits include songs such as “Brand New Man,” “My Next Broken Heart” and “Believe,” which was the ACM Song of the Year in 2005 and the CMA Song and Single of the Year in 2006.   In  2011, Ronnie resumed his solo career as a singer-songwriter with “Cost Of Livin’.”  Ronnie was inducted into the Oklahoma Music Hall of Fame in 2003.

K.T. OSLIN
Kay Toinette Oslin was born in Crossett, Arkansas.  After her father died, she moved with her mother to Houston, where she later attended college as a drama major.  In 1966, she joined the road company of Hello Dolly!.  When the musical returned to Broadway, K.T. remained in the cast.  During the next two decades, she appeared as a chorus girl in musicals such as Promises, Promises and West Side Story.  She also sang commercial jingles around New York and began writing songs.  By 1981, she was signed to Elektra Records and released two singles with modest success.  She also had songs recorded by Gail Davies, The Judds and Dottie West.  By 1987, K.T. had moved to Nashville and signed with RCA Nashville.  She scored big with her self-penned “80s Ladies,” which was named 1988 CMA Song of the Year, making her the first female writer to win the award.  That album also launched the singles “Do Ya” and “I’ll Always Come Back.”  Her second album generated five singles, including “Money,” “Hey Bobby,” “This Woman,” “Didn’t Expect It To Go Down This Way” and “Hold Me,” which earned the 1988 Grammy for Best Country Song.  K.T.’s third album generated the hits “Come Next Monday” and “Mary And Willie.”  She was named 1988, 1989 and 1991 SESAC Songwriter of the Year.  K.T. is a 2014 inductee into the Texas Heritage Songwriters Hall of Fame.

Any more questions? Feel free to drop us a line!

Arman Asadsangabi and his band Oddnote make Waves around Nashville

Marvel Comics and the Power of Licensing
Scroll to top